Having lost two sets of $180 Etymotics (4s and 4p) and two sets of $125 Shures (SE210s). I’m feeling miraculously stupid about holding on to anything. But at least I can try a new set of phones. I tried the $120 Shures for a while and they just don’t fit my ear that well. Too short a barrel, so not enough isolation really. Also tried these $50 headphones nuForce with special $15 ear thingies. It is still not comfortable for me as the ER-6i and the ER-4. So what to get now:

Gizmodo review is really great. They really like the new Etymotic hf5 which is $150 and between the $90 ER-6i and the $180 ER-4s and ER-4p. There is also a hf2 which is the same but with a microphone. I don’t normally use the microphone when listening to music. Most listening is in the gym or on the plane. As an aside at the lower end, they like the Ultimate Ears Metro.fi 2 and in the middle the Shure SE110 for $110 (although I can’t get them to fit). 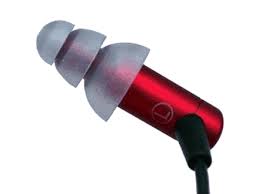 TAFB on Amazon compared tthe ER-4P, Jays Q-Jays and Ultimate Ears 5 Pro and 4vi. His basic point is the $20 more for the ER-4Ps. So if you want the ultimate quality, then the Hf5 and the ER-4Ps. Head-fi.org says that the ER-4Ps are slightly better. Taikero says the Hf5. Finally Oldschool does really the best comparison across saying the issue is price performance. ER-4Ps are the best quality but cost the most at $180. While ER-6i are decent (and they fit me) at $90. And the hf5 is in between with nicer design and less microphonics (this means that when the cord rubs, do you hear it in the earphone because the cord is transmitting vibrations). He also says that for him the new sealing works better on the hf2/5s. One point is that technically the ER-4Ps are brighter at the high end, so this can sound bad. Google Shopping shows $175.

Headphone.com has a good review and is supposed to be more flat in terms of frequency response and have drivers that are hand matched which is why they cost more and they need a headphone amp because they have higher impedence (100 ohms) vs. 27 ohms for the ER-4P and in fact you can buy a $60 cable that adds 75 ohms of impedence to the line that converts the ER-4P into a ER-4S. Here’s the frequency response curve for ER-4P as an example. At left is the measured frequency response of the ER-4P. 35-42 dB of isolation for all of these is the main advantage of in-canal earphones.

Here are some dark horse alternatives and a good overview of iPod specific headsets from headphone.com. Denon AH-C452k is another headphone recommended by headphone.com. It is hybrid design that doesn’t require deep insertion and is just $60, so a good choice in continuing to find a cheaper alternative.

Sleek Audio SA6 is another dark horse. They are in the ear as well and their main thing is that you can tweak the frequency response by attaching various things. They have 15-20dB of isolation and cost $200 and measured, it seems a bit more bassy.

Thoughts on whole-home wiring for new and existing with CAT 6a/8, MOCA 2.5 and PowerLine and Wifi 6e